Travelling With A One Year Old: Your Questions Answered

Zoe
8 min read
1289 views
1 Comment on Travelling With A One Year Old: Your Questions Answered 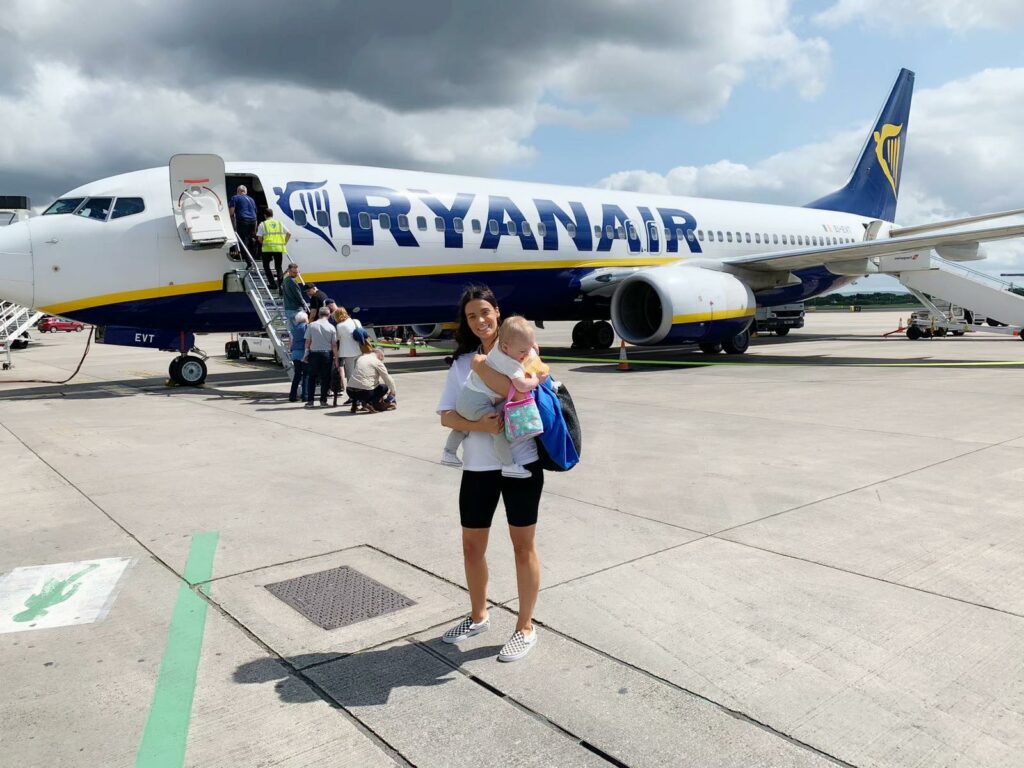 Travelling with a one year old is not going to be easy. If your one year old is anything like my little Mole, they will not entertain being strapped in for a long period of time. So whether you are travelling by a car or by a plane you have a challenge on your hands.

What can you do?

Firstly, really have a think about your current one year olds development. All toddlers develop at different rates so one thing that works for one may not work for another.

How do you keep a one year old entertained on a flight?

I had a good think about what Mole currently loves to do. Reading, stickers, dancing and playing with my things like sunglasses. I focused her toys for around that, rather than something like stacking cups or teddies which she is not fully into just yet.

I went shopping before the trip so specifically to find her some new activity books and toys. Although not cost friendly, this was great as she was fully interested in what the new toy did.

Here is a toy I recommend: Activity Toy

Here is a book I recommend: Three Little Pigs Touch and Feel

We also had a cheap pair of baby sunglasses for her to play with putting them on and off and I wasn’t worried if they got broke (which they did) but so worth it to pass the time.

One piece of advice I was told time and time again was to download something for her to watch. We did, but this did not answer our prayers when she was playing up. Mole only watched something for around 6 minutes and then she lost interest. Which to be fair, is exactly what she does when she is watching something at home too. It was great to have the option readily available. 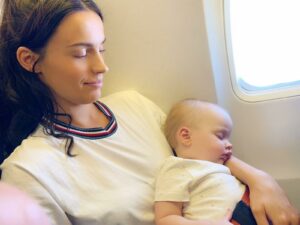 We also entertained her with the “Peppa Pig App”. There is a painting section where you can swipe your fingers all over the phone screen to create pictures. (Easier on a tablet/iPad). This was far more suited for Mole as she was busy moving her hands.

Snacks are another great way to pass the time. Although not the healthiest option, Mole had crisps. I cant actually believe how well they entertained her. She loved trying to take one out of the packet. We did the same with raisins. Basically any snacks that take a while to eat. Avoid chocolate, chocolate gets very messy on a warm plane.

Tips for a child who does not like staying still?

This is Mole all over. On the first flight I felt like I had to be strict with her, making sure she was sat still on my knee, constantly occupied with one of her toys or books. It did not work. In fact, fighting against her wanting to move around just made matters worse. The tantrums were next level and being pregnant with a one year old having a full blown tantrum on my knee was no fun. Here is what I did instead: 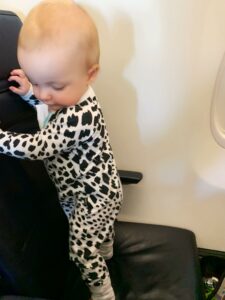 For the flight home, we travelled early evening instead of mid day. The day of the flight, I let her crawl/walk everywhere. We were in the hotel lobby for some time watching her crawl around. I then made sure she had a nappy. Just a short one to prevent her being over tired. Then I did the same thing at the airport, let her crawl around everywhere (where it was safe and easy to do so). She was absolutely filthy but worn out.

On the flight, she would stand on my knees and peek her head over the top of the chairs to get attention off the other passengers. I let her do it for the sake of three easy hours of no tantrums.

I even let her sit on my seat whilst I sat in the footwell just so she did not feel as restricted.

Being calmer myself, seemed to have a big impact on her. I didn’t fuss over her once like I did going out. I didn’t keep handing her a toy until she really wanted it and the same for her snacks. I think toddlers can play up on your emotions.

What to do for the take off? 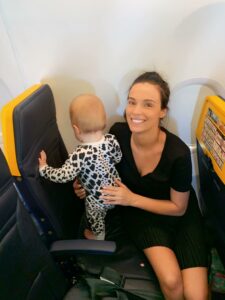 I packed a bottle of milk to help reassure her and to help with her ears popping. She actually got really excited when the plane was taking off, turning around and giving the biggest smile ever like she was on the ride of her life.

When the air pressure changed, I tried to give her a dummy but she wasn’t interested so we just stuck with the bottle of milk.

What did you pack in your hand luggage?

I had one hand luggage for the plane which was my straw beach bag. I had nothing for myself except for my phone. Everything was for Mole, her lunchbox with snacks, water cup, milk, Calpol, 3 books (picture, touch and feel, and a sticker book) and any other toys. I also packed her favourite blanket but it was so hot on both flights we didn’t bother getting it out.

You can take as liquid for your child as you need to. At security I just placed all her liquids in a tray and that was that.

Did you take a Stroller to the airport?

Yes we did, this is the Stroller we took with us: Mamas and Papas Stroller

I highly recommend it! Very easy to put up and down, all one piece and light weight. No issues at all using it the whole holiday.

The reason I got a stroller is because our current pram was very expensive, heavy and not as easy to manoeuvre as a stroller. We did take this pram with us on holiday when Mole was a newborn and it was better suited.

What did you do about a car seat travelling abroad?

We mainly used the car seat for the taxi in the UK. I wanted to decrease the time Mole spent on my knee when I knew she was going to be on my knee for three hours on the plane.

In Portugal, they had their own safety regulations with car seats and our private transfer wanted to use their own. Some transfers stated that you need to bring a car seat or you can not travel with them

On the shuttle bus to the beach Mole sat on my knee.

What clothes did you take for your toddler on holiday?

I recorded a YouTube Video showing you all the clothes I took for my toddler.

I would recommend planning outfits for day time and evening on each day with a few spares so you know not to over or under pack.

What did you do about taking swim nappies, nappies and formula?

Mole is on whole cows milk. As I was unsure when the next time I would be able to pick up a fresh bottle, I opted to pack a couple of these ready made formula bottles.

This was super easy for when we arrived as I felt like I didn’t have to race out to find a shop for milk.

When Mole turned one I stopped sterilising her bottles. You can now buy portable sterilisers if you need one.

I packed two packs of little swimmers in our suitcase.

The duration of our holiday was 7 days. I packed 18 nappies and ran out pretty quickly as she hated wearing a wet swim nappy and the first few days being in a wet swim nappy was making her sore.

If you can pack more in your suitcase or order them to be delivered from Boots in the airport. We ended up having to buy a pack of nappies out there for $25.00 and they may as well have been made out of tissue paper. 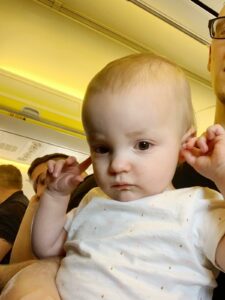 My final advice will be you can not control to an extent what is going to happen so please do not stress about it. On the flight out Mole was horrendous. She screamed the whole time and she has toys, snacks, Calpol, milk…everything.

You will never see the people on your flight again so if they turn around and give you evils (which we had a lot of) do not care. At the end of the day you can only do your best and toddlers are very strong willed.

The flight home was the opposite. Mole was a dream, giggling the whole way. I was dreading that flight to the point where I was feeling so sick, as the first flight was so bad and now I think back and it was all over nothing as she was fine.

Give yourself plenty of time in getting there and try to take turns with your partner if you can.

Feel free to read my previous blog on flying with a baby when Mole was younger.

How To Encourage Your One Year Old To Talk